Guard Rail is in

The guard rail was finally put in along the road where my dad's truck went off and flipped over. This would not have been done without the hard work of my Uncle John. I know my dad would have done the same thing if one of his family members had passed the same way. Thank you Uncle John for all your work.
Posted by Laurie at 11:06 AM 1 comment: 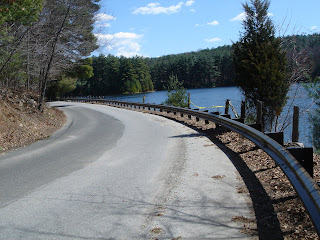 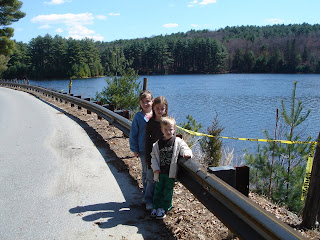 My Nieces and Nephew 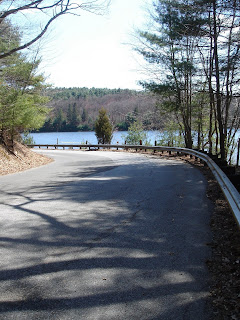 A long cold winter in Minnesota

Sorry I haven't posted in a while. This is the time of year that I hibernate. It has been a very cold winter. Colder than the average winter in Minnesota. The kids can't even play in the snow because it is too cold. Dennis is usually the one that goes outside with them. So I have no pictures of the snow. I tell people that I am allergic to the cold and snow! It is absolute torture to go out to the bus stop with Lexi. Even to do daily errands is torture when it is 10 below zero. When going somewhere with the kids it takes 30 minutes to get everyone dressed with coats, boots, hats, mittens. So by the time I grab my coat, gloves, and bag they are sweating so bad they start pealing their clothes off, and so we start all over again. Well, it is now March 1 8:30pm and the temp is 8 degrees. I am so ready for NOT spring but Summer. Spring in Minnesota is still winter to me. I will try to post some pictures soon when Lexi and Timmy get well. Lexi has strep throat and Timmy has a bad cough. Hope everyone stays warm!
Posted by Laurie at 5:57 PM 1 comment:

Timmy had a tonsillectomy and adenoidectomy on Dec. 9th. He had horrible sleep apnea. Every time he would catch a cold his tonsils would get huge. Two weeks before the surgery the sleep apnea was so bad that he was put on oral steroids to try to shrink the tonsils and adenoids a little to make him breath better till he had surgery. The surgery went well. The doctor said he had never seen such bad tonsils in a child. He said they looked like an adults tonsils full of scar tissue like someone who had had many infections. I am thankful that they are finally out.
Here are some pictures of the hospital stay.
Picking out a flavor lip smackers for the mask to put him out.
Getting put out. This was the worst part for me.
In and out of sleep from the anesthesia.
This was the best part for him. After a few days he was sick of Popsicles.
Happy on pain medication.
Posted by Laurie at 10:47 AM 2 comments:

Happy 5th Birthday Timmy!
I planned a small party for Timmy this year. Only three friends came. It was very small but it was a good size for him. I also made a gluten, dairy and egg free cake for him due to his many allergies. He would not even try one bite. Oh well. He just stayed with the dairy free ice cream.

Every time someone would ask him what he wanted for his birthday he would say "Geo Trax". This is a train set that he got for Christmas last year. It has extras that can be bought like more track attachments. This is his absolute favorite(or obsession). He looks at the diagram on the instruction manual of the different ways the track can be assembled and he can spend hours assembling and disassembling.
Posted by Laurie at 8:03 PM 2 comments:

I was really wishing this b-day would just disappear. Turning 40 is hard but the memories of this time of year are harder. One year ago on my birthday was the last time I talked to my Dad. He tragically passed away 4 days later on Nov. 13th. So, Dennis and my sister Karen decided to change the bad memories into good memories. They surprised me with Karen and her kids showing up for my birthday weekend. Dennis planned everything from the babysitter to dinner out at a Japanese Restaurant for Teppanyaki. I knew about the dinner but he also surprised me with a limo. Here are some pictures of the weekend.
Pictures are out of order. I still don't know how to do a slide show.

OK, I finally finished it. I have been trying for months to get the posts done of the pictures and things said at my parents memorial services. I am not a procrastinator (ask Dennis) but this was something that was very hard to get done. Scroll down to Sept 13 and then to older posts to read about my mom. Also, click on the links of you tube. These are the songs played at their services.
___________________________________________________
Jeremy Camp "There will be a day"
http://www.youtube.com/watch?v=8TipLsmZgjI&feature=related

Isaiah 25:8.
He will swallow up death for all time, And the Lord GOD will wipe tears away from all faces, And He will remove the reproach of His people from all the earth ; For the LORD has spoken.
Revelation 21
3. And I heard a loud voice from the throne saying, "Now the dwelling of God is with men, and he will live with them. They will be his people, and God himself will be with them and be their God.
4. He will wipe every tear from their eyes. There will be no more death or mourning or crying or pain, for the old order of things has passed away."
5. He who was seated on the throne said, "I am making everything new!" Then he said, "Write this down, for these words are trustworthy and true."
6. He said to me: "It is done. I am the Alpha and the Omega, the Beginning and the End. To him who is thirsty I will give to drink without cost from the spring of the water of life.
Posted by Laurie at 11:32 AM 2 comments: